Fixing “Error 5: Access is Denied” when using “Run As” command

New here? Read more about why software developers are adopting Thinfinity® VirtualUI to run desktops apps in the cloud and increase the value of their Windows applications.

Some days ago, we received an issue report related to an “Access is Denied” error that came up trying to run a Thinfinity® VirtualUI web-enabled application. We replicated the user environment and made absolutely sure that the configuration was identical, but we could not reproduce the error.
In the user environment, the program insisted on running perfectly from the desktop, but it didn’t run through the web using VirtualUI.
We double checked all security settings, unsuccessfully looking for a clue as to why this could be happening.
There’s nothing more annoying than a non-reproducible error!

Persistence pays off. The clue to solving the Access Denied error was related to the way VirtualUI runs a program. When you run a program from the desktop (by double-clicking on the executable file, etc.) you are using your user account. But when accessing the program through VirtualUI, it is run under a secondary logon, which is exactly what happens when the “Run as…” command is used.
That is why we asked the user to run their desktop application in their environment using the “Run as” command. This test produced the same error and enabled us to isolate it out of VirtualUI.
This put us on the right track. We did some research and we found that the problem occurred in upgraded Windows installations only. In this scenario, when trying to use the “Run as…” command, an “Error 5: Access is Denied” occurs.

In its support site, Microsoft says:“This issue occurs because the discretionary access control list (DACL) for the Secondary Logon service is not set correctly when you upgrade from Windows Server 2003 or from Windows Server 2008. This problem prevents a standard user from starting this service and from running an application as a different user.”

We found that the first of the two possible workarounds provided by Microsoft fixed the issue.
To solve the problem, please execute the following command from a cmd prompt window:

Make sure to copy this command correctly, without the double quotes it fails with this error:

By running this command that fixes the secondary login error, we can make sure that it doesn’t produce an “Access Denied” error and the application can work as expected.
Have any questions? Contact us at [email protected] or leave a message on this same post.

In our last post, we started with a new “notes and tips” series aimed at helping developers take full advantage…

Single sign-on (SSO) has lots of advantages for users and IT admins love it as well. While password management gets…

In a previous post we explained how to add remote data persistence to your apps by saving cookies in the browser…. 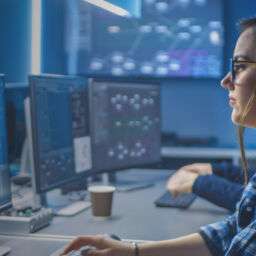 You created a great Windows desktop application that was perfect for your user’s needs. But now those needs have changed,… Open or close a port in Windows Firewall
0
08 Jan 2021
How to create a Virtual Machine (VM) in Oracle Cloud
1
25 Nov 2019
How to configure load balancing in Thinfinity Remote Desktop Server v3.0

In this article, we will briefly describe how to configure Thinfinity Remote Desktop Server v3.0’s components to work in a…

New here? Read more about why software developers are adopting Thinfinity VirtualUI to increase the value of their Windows applications….

As already discussed in a previous post, one of Thinfinity VirtualUI’s features is that the desktop application doesn’t need to… 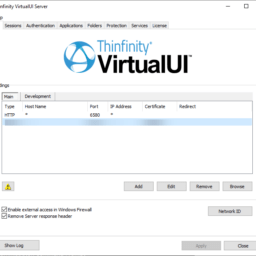 Thinfinity® VirtualUI is a Web enabling SDK that delivers your Windows apps on any device, anywhere. All with a single…

Thinfinity jsRO allows programmers to get a better integration between a VirtualUI-extended desktop application and the web browser Javascript world….

In a previous post we discussed how to apply general custom settings to Thinfinity Remote Desktop Server. Today, we will…